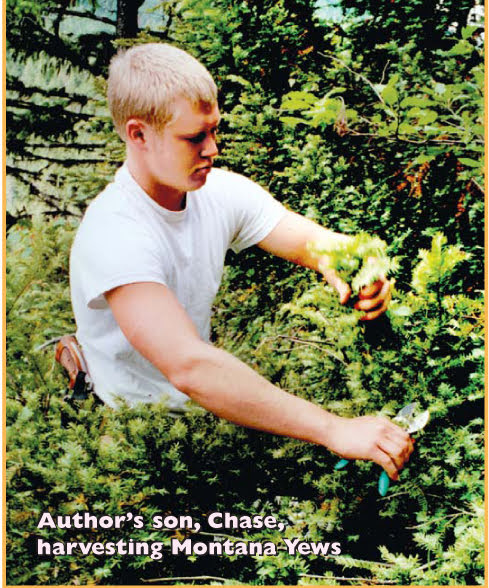 Monitoring Procedures for the Sustainable Harvest of Pacific Yew

Most harvestable yew 'patches' in northwest Montana and northern Idaho will average 50 to 200 acres in size. The harvestable yews range in height from about 10 to 15 ft. Generally, up to about 10% of the tree's total foliage is harvested.

In these units, 8 representative yews will be selected throughout the unit for monitoring.

Each yew will be mapped with GPS location. Harvested yews will be flagged with pink flagging and photographed before and after harvest. Each reference yew will be selected to be paired in size with a pink-flagged harvested yew. Each reference yew will be flagged with blue flagging and photographed. Each of the 8 yews will be identified with a metal tag. Even numbers will be assigned to control yews and odd numbers assigned to harvested yews. Three branches on each harvested yew selected at about 120* from each other around the tree will be tagged with a metal tag and numbered 1, 2 and 3. From each of these three branches, length of pruned bough tips will be measured and recorded at the time of harvest.

At the end of the third growing season after the harvest (early September), all new foliar growth from point of clipping will be measured to determine regrowth, regeneration, and distribution of growth, as was recommended by Dr. Nan Vance in her report, "Bough Tip Harvest of Pacific Yew Growing in Western Montana".

Analysis of data will be done with the help of Dr. Vance, USDA Forest Service research plant physiologist, emeritus.

For the 8 (control and harvested) monitoring trees, condition of the new growth will be recorded as well as any damage including damage due to ungulate browsing, mite infestation, frost, or other biological or environmental factors.

Monitoring results: Results of the regrowth, health and vigor of the trees will be submitted as a written report to the forest contact person. If yews respond vigorously to clipping with healthy regrowth, it would suggest that the harvest of the branches is occurring in a sustainable manner, and a four-year return interval for reharvest after the initial harvest would not decrease the vitality or persistence of the tree.